08 Apr Sifting through Ashes: Report from “Clean up” Day 1 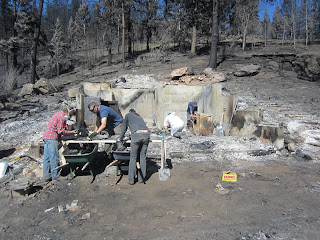 I miss my morning routine where David and I brewed our French press coffee (for which we were famous among our friends), and sipped the brew in our hearty mugs as I sat in my leopard chaise by the window, and David sat on (our brand new!) couch with Bill purring on his lap. We watched the world come alive from our vista and did our morning “meditation” (which for us was reading Gangaji).
Recently I have been waking up before the sun, which is not my usual M.O. A friend asked if I was meditating, I said “Yeah right!” (actually I said something like “F-off” because she is the type of friend to whom I can say anything…isn’t that right, Kristina Hall) Right now, I do not want to be with the quiet. My brain, which throughout my life has not always been my friend, wakes me and tells me there are things to do, things to figure out, and things to think about. There certainly are lists of things we need to write. Much of the key to how our insurance experience goes depends upon lists of excruciating detail. We must remember every little and large (and everything in between) thing we had. We must document all of it with a description, price and date of purchase. We are talking about things collected over a lifetime – some priceless due to the sentimental value, some difficult to price due to the eclecticism, some we will probably forget and remember in the middle of the night or some other inopportune moment months or years after our claim has been filed. The pressure of “getting it right” wakes me up early, yet the list is the one thing I resist the most.
My friend Susan is coming over for 5 hours on Wednesday and we work on the lists. I will enlist my mom to spend time on the phone with me talking and her capturing – she will love to help me in this way. Others have volunteered their services and I will say “yes!”. Then, all of this must go in a well organized excel spreadsheet. For those that have been through a massive property loss, you know what I am talking about. For those that haven’t experienced this, make your list now! You won’t do it, I am pretty sure. But really really really it is a good idea. At the very least, go room to room and take pictures of EVERYTHING! What’s the point of having a camera on our smart phones if we don’t use it smartly?
It’s one thing to lose our home and all our worldly possessions but we have been told we now have a new full time job running a corporation called “Operation Replace Everything”. We have also been told to expect this process to take a while, a long while, much longer that we think it will be type of while. My new friend who lost her home in the 4-Mile Canyon Fire says we should plan on at least 22 months… My new mantra: it’s a marathon not a sprint. Breathe…
It’s a good thing we had nothing else going on. It’s not like I was finishing writing my second book, embarking on a massive re-write of my first, coaching groups of authors in writing theirs, publishing non-fiction authors, attending business development workshops around the country, hosting my radio show, doing speaking engagements, and working with my team to take my non-profit to the next level. It’s a good thing our lives were relatively slow paced and uneventful…
Of course we will rally. We will accept the support offered from our extraordinary community. We will take it all one step at a time.
Yesterday, we began the first of a series of clean-ups of the site. Our beloved friend and soul brother Chris Meehan, organized a crew of our peeps to begin this daunting task. When I say “organized”, I mean it. He had detailed instructions of safety gear, protective clothing and tools needed, he held updates and briefings on protocol. He brought his brilliance as a professional project manager to our monumental project. Our crew (Greg Carman, Ann Sparks, Mariea Monday-Richardson, Stuart Richardson, Aaron Sommerfield, Bill Harvey, KC Butler, Autumn Pearson and Sean DeGroat) gathered at the site at 9:30am and compassionately listened to my personal briefing that we were doing “surgery on a baby” (see “Raw” post from 4/7).
I expected the day to be more difficult than it was. As the “structure” was dismantled, I anticipated that each piece removed would leave me a little more raw. Yet the mood and the love of our team allowed me to experience gratitude. Mariea lovingly prepared 2 choices of sandwiches in brown paper bags along with Easter candy for all. Chris directed the action, everyone worked together in harmony and David and I were able to participate, stand back, begin inventory – and for me, sometimes just wander away.
To add to the mix, Autumn who works at Depot in Evergreen asked if they could help us (and others who lost their homes). Home Depot donated a $1000 of equipment for the day (which we are passing along), sent a crew (Jewels Lewis, Scott Baker, Christina Ryan and Chris Armstrong) to assist and Steve Powers, the regional manager stopped by to offer “anything we need” going forward. A special shout-out to Christina and Scott, who had never met us before, yet ended up staying the entire day – and were on their hands and knees with the rest of us, sifting through the mess. Truly, the generosity of our community is mind-blowing. 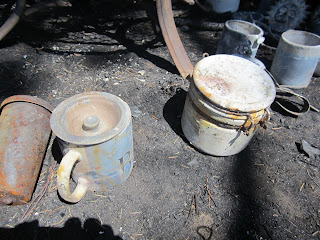 What we found: a lot of artifacts. Everything that “survives” a fire looks ancient and important. Metal curls, bends and changes color. Glass coagulates and grabs near objects as it melts. A few ceramic pieces survive intact. Note to self: buy white storage canisters at William-Sonoma! Seriously, these were our wedding gifts from 1995. One in particular, is almost re-usable (except for that dang metal clasp…). Our cast iron skillet is coated with a crusty burn, yet I am sure it can be cleaned up. Do we have anything that is truly useful still – no. We have artifacts that have a disturbing beauty and remind us of something. Some we still aren’t’ sure what they once were. Some we know. We are only keeping a little, as we don’t want to create a junkyard of burned memories.
On a trip to Costa Rica in 2009, I found a cement figurine of a dragon-dog. We had recently lost our beloved dog Jaxson and for some reason this 25-pound statue reminded me of him. I had to have it and I carried it as check-on all they way home. It lived on my office floor, staring at me with its hooded dragon eyes. We found it’s mangled body first, and then it’s somewhat intact head. That I will keep.
In my mad dash to leave the house, I grabbed only 2 books (besides the box of some of my own book “Waiting for Jack”.) For a writer and a prolific reader, that was a tough call. We had hundreds and hundreds of beloved books. We also had many that I never read and probably never would read… I regret leaving some other titles, particularly “Bird by Bird”, “Sight Hound”, “How to Write a Book Proposal” (yes, dear author clients, I mean it!), “The Art of Racing in the Rain”, and my “Big Book” I was given in rehab in 1989 which was signed by all my fellow patients as well as my counselors (that one is obviously irreplaceable). What I chose to bring was Gangaji’s “Diamond in Your Pocket” and “Hidden Treasure”. I have been reading Gangaji for the past year almost daily. Her message is the most pure and impactful of any spiritual teacher I have ever studied. I love that I have her books.
Speaking of books, absolutely NO paper survived the fury, yet somehow, we found the singed remnants of two books – “The Essential Enneagram” and “The Power of Now” – that’s cover art peaks through a blackened frame. And, inside of one was an almost fully intact bookmark created by our spiritual mentors the Fifield’s in 2008. Wild!
We also found some of David’s coin collection – again coated and angry looking yet salvageable. We did not find his wedding ring, which he left in the bathroom before his last business trip. It sat awaiting his return in the fold-out drawer beneath the sink. As we sifted through piles and piles of ashes and clumps of detritus, I hoped (and expected) to see a shiny band of gold emerge from the muck intact. We discovered a pool of water at the bottom of our water tank in the laundry room. As it was the last bastion of hope for the ring, Sean and I scooped through that muck by hand. No such luck. 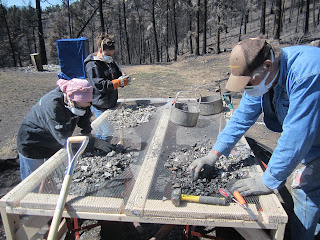 A little later, I gave up hoping to find anything as the pile of rubble was just too annihilated. That fire burned ferociously. I can’t remember if I mentioned, David’s “fire proof” safe was completely scorched devastating his beloved and valuable collection of guns. This was his last hope, and it was dashed after a friend helped him cut off the top of the safe. That company is getting a letter for sure!
Yet a few more treasures emerged. Another touching prize was finding 2 “medallions” which are markers of sobriety in 12-step programs. They were both David’s and neither was his current coin of 21 years, yet finding these was poignant. Even more so, as the sweet heart that found them was a newly sober young woman. She gingerly carried the medallion over to us with tears of love and hope in her eyes. Moments like this carried us through the day and the next level of realization of the devastation of our home.
We really have no “thing” left. I can’t say “nothing”. We have plenty. We are loved, supported – and we are resilient creatures. We know we will emerge. We know we will go through our emotional roller coaster. We know there is a light at the end of the tunnel but we are not sure how long this tunnel is.