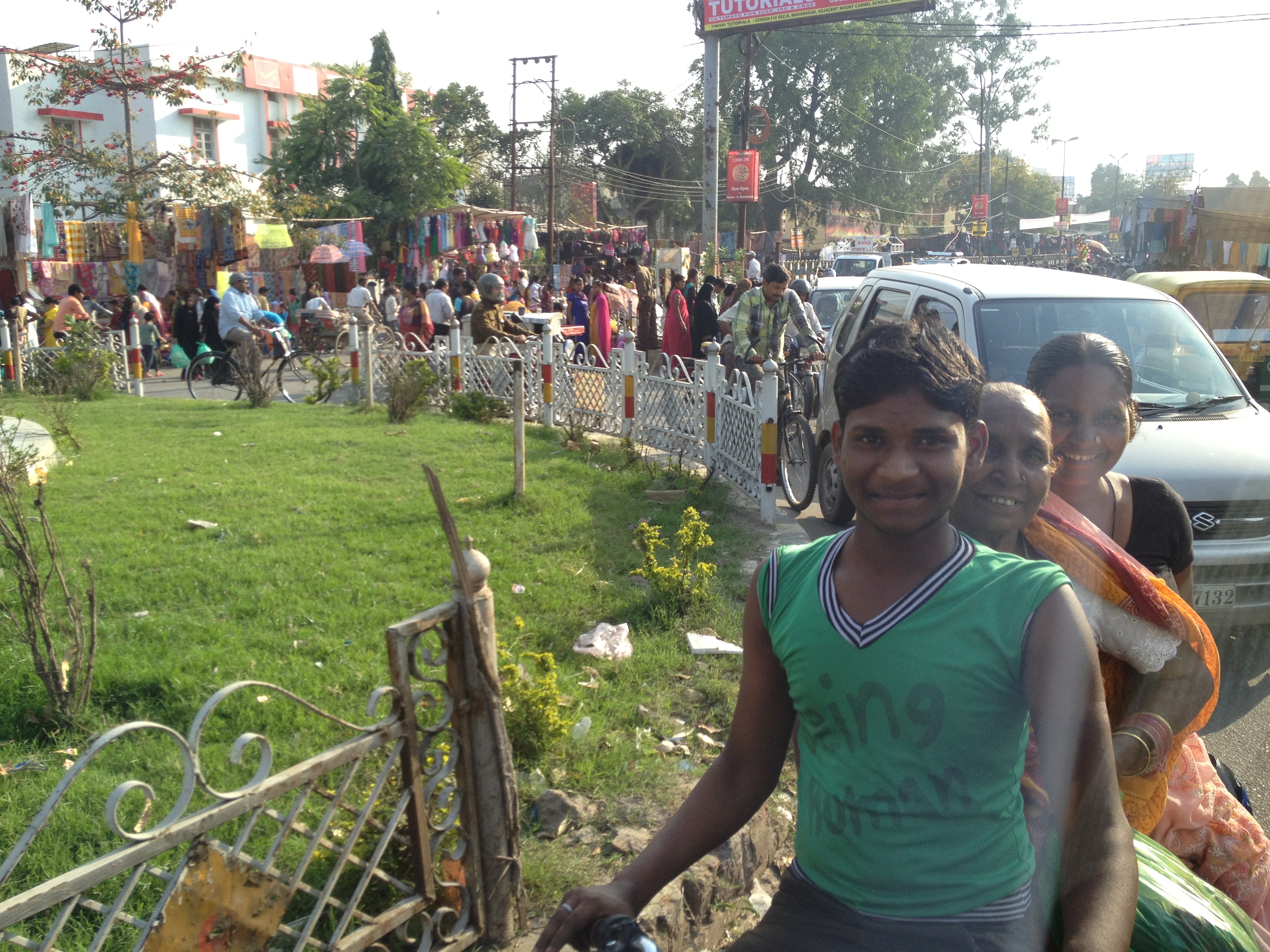 14 Mar All is well in India

I sit this morning in the upper balcony of Papaji Satsang. On top of three story building it is surrounded by trees and covered with a Palapa roof and awnings. A small breeze blows through. The music in the air is of the Satsang singing chants, the honking of the horns, the banter of the lovely staff who are readying this place for our mid-day meal. I love the sound of their voices and their sweet faces have grown on me. Outside of this sanctuary we are surrounded by other parts of India – the grime, garbage, ribby dogs and cows that wander and feast upon the garbage, dirty children begging in the street, beautiful women wearing traditional dress in every color imaginable, men on motor cycles, smoke floating in the air. 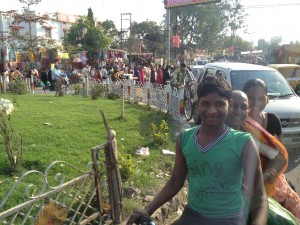 The lovely faces of India

To take it all in is impossible. I don’t even try as it is futile. I have heard people from the group scoff at those who say they feel at home here. I don’t feel “at home” as in this is my home but I feel surprisingly non-resistant and non-reactive to what I see, hear and smell. The funny thing is, that news or interactions from home rile me more.

I learned a sad story of someone I love today which affected me deeply. Yesterday morning on Facebook someone commented on my observations of India and due to my lack of outrage at what I was seeing he labeled it “disingenuous”. I felt a stab in my heart as I read his words. My post wasn’t a denial of “problems” that exist here or other places in the world, instead it was claiming my right to not judge and assess and assume I have the answer for all that ails us.

As I contemplated this American’s reaction to me, I think of a new friend we have met while here.  After breakfast with him, we visited the school where his wife works and his daughter attends, we drove past his lovely home and he showed us some of the parks that add greenery to Lucknow.  Having grown up here, he is the perfect guide.  Having our chance encounter and discovering what we have in common is nothing short of miraculous.  We will spend more time with him next week, including attending an 12-step meeting.  What are the chances that he would be the one who delivered my SIM chip to my hotel.  Lucknow has  a population of over 2 million and only 20-30 total in our 12-step fellowship.  For some reason, he mentioned being in our fellowship in the first 15 minutes of conversation and we obviously fell deeply in love with him. We also plan to attend the Holi Festival with him in 2 weeks which is a holy day where everyone takes to the streets and paints each other in bright colors.

Would I ever be so presumptuous to assume I had answers for India? To judge this country from my limited American perception is downright arrogant. I wonder about this man who commented on my post. What was his venom about? I tried to connect with him to hear his thoughts (and perhaps learn about his heart) in a private message but he wouldn’t respond there and kept adding more angry messages to my page. Some friends started to comment on his commentary and rather then continue that, I simply deleted him. (Ah, the power of Facebook…) He wasn’t interested in engaging me and educating me, he was interested in shaming me for my naivety.

I love it here. Not like I want to move here but like I want to come back, know more, explore, meet more of the people, understand their ways and their culture, see their country, learn, open.

I love these people. I love the sweetness in their eyes and hearts that comes through so innocently. I am not claiming there are not those who are angry and do bad things. There are those types everywhere in the world. So far, everyone I have interacted with (aside from a few at the airport in Delhi) have been nothing but sweet and genuinely gracious. When they see the cameras in our hands they want us to take a picture of them and their smiles light up my heart. Right now, I stop to weep at the beauty of it all.

I didn’t think I would love India as much as I do. Do I feel changed already? I don’t know. I felt changed before I came. The last month before my trip I felt a relatively consistent state of expansiveness. Not that every moment was one where I felt connected to the divine but more than not, a new state seemed to be taking hold. I believe I am the same person though but it’s as if much of the velcro that holds my old stuff in place has been released. I see the poetic beauty in so many things.

Being here and hearing the news of one of my friends, then meeting another man here who tells me of an experience he had, the brief stab on Facebook all stir me up again. My next level of what I can be with and what I want to block out comes rushing to the surface.

I watched “A Passage to India” the night before leaving.   One of the characters claims, “India forces you to deal with yourself”. I believe that. It happens differently than I expected. But then again, everything does.