How do I tell this tale? Words will surely fail even while the richness leaves my jaw-aching from perma-grin. Last Monday morning at 8:45, I bought a 1960 Airstream Pacer. This was not exactly a whim, although it was my first purchase on eBay. Ever. For anyone who knows the rush of a bidding war on eBay, you know what I am talking about. And, factor in that this was a somewhat larger than usual purchase and not simply a pair of shoes or a purse. 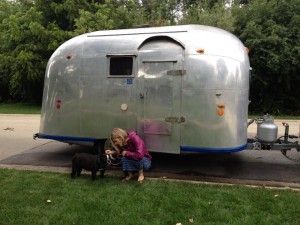 I say it wasn’t a whim, as over the weekend, David and I attended our first Airstream rally. Having met a whole new group of lovely like-minded people, we joined the club and began to broaden our Airstream horizons. Many of our new club member friends have multiple trailers, which opened our minds to the possibility of more than one.

The possibility opened up even more when the next phase of my business took form during our expansive hike to a 13,000 foot peak. You know those moments of creation where ideas are coming quickly and wildly? I was in the flow, in the groove. Finally! After the fire, I continued to work with a few clients whose dedication to their books outweighed my lack of dedication to my business. Yet after having been in high gear for my business previously and then having it come to a screeching halt when the fire happened – purpose had been missing.

Part of our longterm vision for our time in the Bahamas has been the dream of bringing others and having them experience the beauty and peace of life on a sailboat – and running retreats that are part adventure travel, part writing retreat, part transformational journey. This has also always been my vision for our beautiful land. People coming together to connect, recharge, be inspired and be in action. Camaraderie, soul-searching sharing, busting through blocks in expression, creating visions and more. Sitting by a campfire, being in the quiet of nature, being heard by others and most importantly, being quiet enough to hear the songs of your own heart.

What would I want it to look like? Cozy accommodations that are outside the norm in Yurts and Airstream trailers with forever views. So my actions Monday morning were in support of this vision. And later that day, I launched “Firewalker Writing Retreats” with the first event to happen in September. Only one problem… the trailer was in New York – and you know where I am. On the phone with Jessica, my emotional rock of Gibraltar, as I was making this momentous purchase and then saying “oh no, oh no, what have I done????”, she the equally adventurous spirit said, “I’ll go with you”. Mother of two little girls, ages 4 and 6, this was not a simple proposition. Yet, a mere four days later, we were in the car headed across the country.

In the meantime, I hired a friendly driver named Scott to pick the trailer up in NY and meet us in Chicago as Chicago seemed a smaller bite to take. So off we went into the wild blue yonder with at times me doubting my sanity. However, this extravagant Ebay purchase was already paying off. Elayne, the sassy woman who handled the sale, is a mechanic blogger who wizens women to the traps awaiting our trips to the mechanic. Elayne has appeared on TV and after I googled her, I no longer worried about the financial end of our transaction. I enjoyed Elyane’s straightforward yet badass nature – and add to the mix that Elaine is my grandmothers name. As the first grandchild, I called my grandmother “Nona” and it stuck for the other grandkids. This 1960 baby now had a name – “Nona” she was.

Now here’s some more magic. When I thought of Chicago as a stopping point, I of course thought of my dear client and now dear friend, Alison Smela. Alison has been one of those clients who has never ever ever – ever given up. Alison began knowing close to nothing about the book world (or if she could even write) yet her deep passion for her topic and huge dedication carried her forward. Less than two years later she could write books about writing, and has written a most beautiful and touching tale.

To how many clients could you say, “Hey, I’m going to be in Chicago for a few hours, can I visit you, possibility stay the night. Don’t know what time I will be there – and, oh, by the way, I bought an Airstream trailer and some stranger will be dropping it off at your house. Does that work?” The answer, probably not many. Yet this one said, “YES!!!!!!” 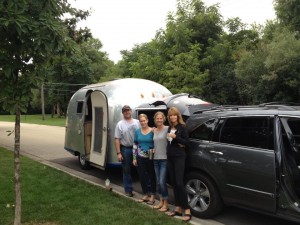 So in we drove at 9:30pm, after 12 hours on the road, to the warm welcome of Alison and Matt who had pizza waiting for us. Barely able to keep our sticky eyes open, we had a lovely dinner while Matt told stories that demonstrated just how funny and cool and sweet and wonderful he is. I fell in love with both of them – then fell in bed and fell to sleep.

The next morning at 7:15, Scott was right around the corner, ready to drop the trailer and continue on his way. Throwing water on my face, I ran down the stairs as he was pulling up. And there in all her silver shiny beauty was my Nona. As good, if not better, than she looked in the pictures.

Scott ambled out of his truck then expertly guided me as I backed up to Nona. Attaching my hitch, it seemed there was an electric wiring issue. The teamwork began in earnest. The boys put their heads together gathering their toys – electrical circuit testers, grounding wires, zip ties and who knows what else. Suddenly Scott returned to his car and groaned. Apparently, not only was he transporting Nona, he was carrying an 8 month old jet black English Bulldog named TC. Apparently TC had explosive diarrhea all over Scott’s truck interior – and his laptop. The team jumped into action, taking the dog out and helping the efforts in cleaning up his truck. After my share of poop removal, I ran circles in the yard with the snorting TC. Nothing like puppy love and energy to further elevate and already perfect morning.

When the boys opened my hood to continue checking the wiring, they discovered a shamefully muddy mess. Not one to be stopped – at all – the gallant Matt had a solution for that too. A pressure washer! According to Alison, Matt loves any opportunity to pressure wash so the women stepped back to let the magic happen. Nona got a bath too. 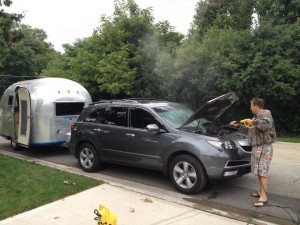 Then it was time for our goodbyes. I had mentioned to Scott how I knew Alison and that in fact we had never met until the night before. As we all parted ways, this road warrior sweetly said, “Please send me a copy of your book. I would love to read it”.

As present as I was this morning as we all worked together, occasionally I stepped back and witnessed the magic of the interactions that were occurring. Five people united on a Saturday morning, working in conjunction, all of us satisfying parts of  our dreams – and our lives. Words fall short in describing the beauty. My heart brimmed over with love and joy. There was something exquisite in all of it – from the obvious of a silver bullet of a beauty, to a jet-black puppy, to four sleepy and one road-weary being all putting our heads together and sharing time and precious moments.

Now, it’s the two of us, hauling Nona back to her new home. Any doubts I had about this quick road trip have long since vanished. My heart is bursting with gratitude for my life and all the gifts – the ones that come wrapped in shiny silver skin, soft puppy fur and human tenderness – as well as the less easy to swallow gifts; those that come wrapped in barbed wire. I take them all and grow with each one. I feel blessed and as I glance at this gift of a woman who sits next to me driving as I write, I count my blessings twice. 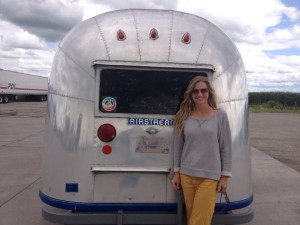 It doesn’t get much better than this. It really doesn’t.