This coming weekend, nine women will gather at my burned out property to explore what it means to be a writer, why they feel called, what they want to say to the world – and why they may never get their message from their hearts to paper. We will explore the dark nooks and crannies of our souls that convince us we can’t live our dreams as we shed light on the traps that befall all whom embark upon the creative journey.

The intention is that these women leave owning their scars as well as they beauty; seeing how their darkness enhances their capacity to create. Initially they may hope to abandon their struggles, but I will ask them to consider another option as they undertake their adventures in writing – and in life. 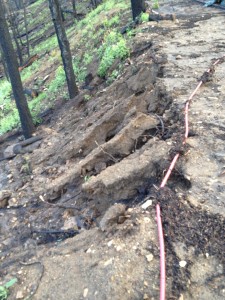 The setting is purposeful and a ceremony of sorts. The land is healing from the fire. A years worth of undergrowth has filled in some of the vacant patches and small groves of seedling aspen have begun to form. Yet the land is still raw and rugged. The earth is still blackened from soot. It’s bloody hot at even a somewhat mild 70 degrees as without any of the towering pines that once held moisture and blocked the rays, now there is no hiding from the scorching sun.

I knew all of this when I created the retreat. I knew the land would test our mettle and show us where we needed to grow. I also assembled a small fleet of Airstream trailers and a cozy yurt so rather than full exposure to the elements, we would experience some creature comforts.

Yet yesterday, I was in for my own growth opportunity when I went to my land to see not only the condition after our recent deluge in Colorado but also how it looked after the forest service removed much of the standing dead.

Over the past 18 months since the fire, we have seen the land go through many spaces. At first our focus was on the mound of rubble that once was our home. We spent weeks sifting through piles to find any semblance of something worth keeping. Then after the site had been scraped clean, for a while the foundation remained as a reminder of what had been. After the final bulldozers left, we turned our attention to the trees, called “Widow Makers” for the fact that these towering toothpicks are structurally unsound and can fall unexpectedly and crush whatever is in their path.

Our first time cutting trees was traumatic, yet their blackened branches and absence of any green was proof that they needed to go and we cleared a swath around our site for safety. Anyone who has done massive tree clearing knows that it’s not a neat job and for months piles of branches and twigs blanketed the ground. Slowly we cleaned up this carnage and watched the land begin to heal itself.

Still many hazardous trees remained and this time a much bigger clean up was planned on our mountainside. Neighbors conferred and reluctantly invited heavy machinery and crews to our properties to carry away further reminders of what once was. We said yes to this operation, knowing it would again alter the appearance of our once lush and lovely land.

As David and I began the soggy, mucky drive down our mile long dirt road to the property, where hillsides of trees once stood, now was bare. Cold, damp rain blanketed us as we surveyed the scene. It looked like a hurricane had moved through. Twigs, branches, bark piles everywhere, the ground soaked and mushy. Some of the aspen grove had been trampled as large deadfall was hauled out. My trail we spent months carving was erased in mud. In the mist and cold rain, I felt myself start to fold.

I can’t bring people here…I don’t want to be here…It’s too much…Too much devastation…Too much to clean up…Not enough time…I want to leave for a year and come back to see what has happened then.

All I could see was the ugliness of the destruction. It looked no different from flood ravaged scenes from all over our state over the past week.

At the same time as I was pulling in to our property, I was completing a virtual course for the weekend. Set to be in Boulder, after the disastrous deluge, the teacher wisely moved us to the phone. I witnessed my teacher dealing with catastrophe all around her yet holding a fierce and love-filled space for growth all weekend. Sometimes emotional, but never thrown, she had to deal with not only the chaos surrounding us all, the logistics of training via tele-conference, water flooding her own basement – but also the unjust criticism of some participants whose demand that we meet in person bordered on pathological. Through it all, my teacher brought grace and strength and delivered the course with perfection.

As I sat in my car, staring at the grey sky, and completed the virtual class with my colleagues, I allowed my grief to bubble up and be released in sobs. Our state was experiencing disaster, homes were destroyed, lives lost, people missing. It continued to rain and waters continued to rise. Once beautiful settings were demolished by forces of nature, yet on the phone we gathered, each of us experiencing the depth of it all, some of us directly, some of us less so. And still, we came together to heal and develop in our path as healers.

After we hung up, I considered my options. I could call uncle and cancel my event. I could flee the beleaguered state of Colorado never to return. Or again, I could learn from the land as I had valiantly asked my own participants to do.

So I did. I beheld the beauty as well as the ruin left by both natural and human caused disruption. I realized that the land will flourish again. It will morph and change. The scars will fade, yet they will always remain.

And, I saw that instead of my futile attempt to expunge what I considered to be ugly, I simply needed to look with different eyes.

PS- a big shout out of love and appreciation for my teacher Julie Kramer – and for my fellow travelers on this path.  Find out more about Julie at www.JulieMKramer.com