Where did the pink go? I sit and watch the sun begin to shine a rosy pink on the peaks around me. I anticipate the glow growing warmer and warmer then suddenly the light is gone. Where did it go?

The light still exists but it is blocked by something at the moment, something just out of my view on the horizon. A cloud miles away obscuring the sun, perhaps. I crave to continue my worship of the pink glow but the minute the thing becomes the thing it is no longer that.

I forget that magic is all around us. We crave big fiery demonstrations of magic where it’s unmistakable – and inconceivable that it could be anything else but proof of what we long for. How close are we willing to look? How quietly are we willing to listen? I look out because that’s where the view is but what if I look to the weeds sprouting up between the rocks? The pile of dirt my dogs dug up? The petals on the mountain flower? 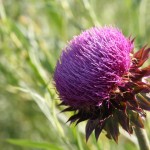 I got up early and came out to the patio with my sleeping bag. Even my dogs didn’t want to be outside. They go back to bed when they realize food isn’t involved. I enjoy the moment, then immediately think of how the days are getting shorter and how few mornings I have left when it will be warm enough to sit outside. That’s what our brains do. We can be in the middle of paradise worrying that we are losing paradise.

Last night I had a conversation with my father whose chronic pain has narrowed his life past his prior loner patterns. Rather than continuing with percocet which impairs his cognitive functioning at a time when he is exhibiting symptoms of Alzheimer’s like his father and of which he is terrified, a surgically placed pain pump has been suggested by his trusted sources. Yet he is afraid to try it, afraid of the surgery, afraid of what might go wrong, wanting to protect his soft underbelly from danger. He argued for his fear last night in that it was an emotion and therefore real. He wants the fear to disappear before he acts but it doesn’t work like that.

Fear tells us it’s real and we believe it. Fear is a response to danger that kept us safe for eons but instead of understanding it for the tool that it is, we believe it to be reality and give it a prominent seat at the table of our lives.

My fear grips me when I am most tired. The state of the world, terrorism, Ebola, David traveling never to return, something happening to Tigger, these things swirl in my mind and sometimes I grab them and nurture them like saplings until they take root, strangle out all other life and dominate the landscape.

Dotting our landscape are the thistle that have done just that. A noxious weed, they drown out all other more delicate plants that attempt to grow. Since the fire, they are prolific and just in the last year, there is an overwhelming sea of them. They are deceptively beautiful sprouting purple flowers, but if you pass too closely, they stab you with their thorns. They overwhelm me. And, yes, I know that it’s not them doing it but I look at them and don’t know where to start. I have missed the window of opportunity as they have already gone to seed to spread their demon spawn. To fight this battle, we purchased a weed-wacker and round-up and soon a machete to take to the forest. I will not let them take my land. The fire created a fertile environment for so much new growth which is evident in this monsoon weather. It brought beauty in scores of delicate wildflowers, grasses and groves of baby Aspen trees. It also brought the scourge of the thistle. It’s a war of the worlds being enacted on our land. If we don’t do something, the thistle will choke out everything else. Do I have the gumption to fight this battle. I want to just sit and enjoy and leave it be but I know that my doing that last year led to fields of the stuff this year.

Where does my attention go? Mostly it has been to sit and worry about it instead of actually cutting it down. Helplessness comes up as it is too late. Fortitude springs from within, I don’t care that it’s too late, I must do something yet still I sit here in my sleeping bag, warm, watching the pink light.

Yesterday I sat and watched multiple storms passing through. The wind whipped, it began to sprinkle, with blue skies overhead and menacing grey on either side. Thunderclouds in the distance roiled and boiled. Pikes peak was partially obscured by clouds and mist rose from the river below. Five minutes before, I was worrying about the world. In that moment, all I saw was the sky. For so long, I wanted life to be a straight line up and out of the trenches of tragedy or the muck of self-destruction and doubt to a place of triumph and glory. Since it hasn’t been that way and instead is an often rocky roller coaster of exquisite ups and devastating downs, I am beginning to find peace anyway. Mostly.

There is something holding all aspects of life together. It holds the storms, the fire, birth, death, good and bad, sun and wind. It holds us – our passions, our mission, our vitality, our fears, our doubts. As I sit in this vast expanse, I realize I am the vast expanse. I am the light and the breeze. I am the pink glow that appears, then disappears. I am the one that sees it and I am the one that longs for it when it is no longer there. I am the scared little girl. I am the one who will crumble when my dog dies. I am the warrior goddess. I am rage. I am the pile of dirty dishes on the sink. I am the purple thistle that dots my landscape.